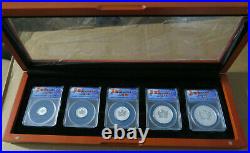 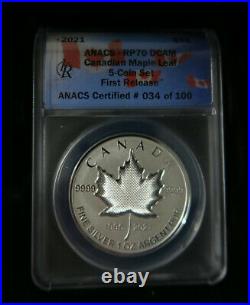 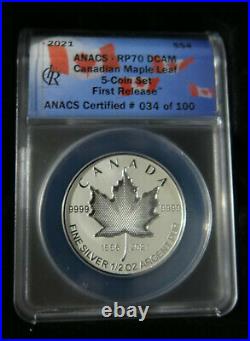 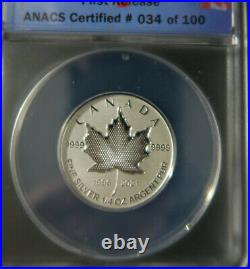 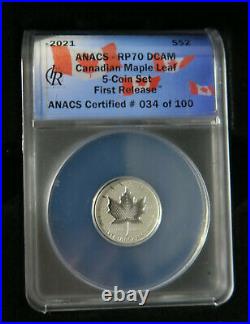 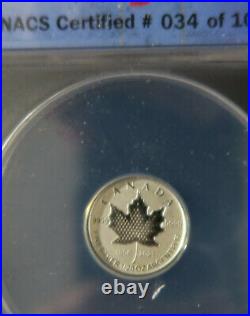 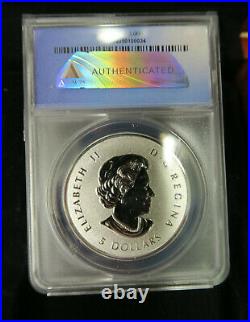 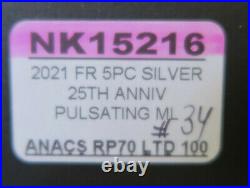 No 34 of 100 sets. 2021 Canada 9999 Fine Silver Fractional Set - Pulsating maple leaf only. It's a maple-themed celebration with a twist! The 2021 fractional set celebrates the maple tree's 25-year (and counting) reign as the national arboreal emblem of Canada.

All five coins feature the Silver Maple Leaf bullion design on the reverse, where an array of precisely rendered sub-millimeter-scale mirrors gives the impression that the maple leaf is pulsatinglike a heart swelling with national pride. First ever "pulsating" pure silver 5-coin set.

A CANADIAN EMBLEM CELEBRATES ITS 25TH ANNIVERSARY. An annual favorite, this pure silver fractional set highlights the 25th anniversary of the proclamation designating the maple tree Acer spp. As the national arboreal emblem of Canada. This is the first set to feature the Royal Canadian Mint's engineered surface mirror technology, which creates the impression of an engraved "pulsating" effect on the reverse.

Don't miss this opportunity to experience a Canadian innovation that brings motion to engraved design! FIVE TIMES THE TECHNOLOGY: Unlike some of the previous fractional sets, the technology-enhanced design isn't just on the 1 oz. Coin it's on all five coins 1 oz. The Royal Canadian Mint certifies all of its collector coin sets. 99.99% PURE SILVER COINS!

This coin set has no GST/HST! LIMITED MINTAGE: Only 3,000 coin sets made available worldwide. Each reverse features the Silver Maple Leaf bullion coin design, rendered using engineered surface mirror ("pulsating") technology developed in collaboration with the Centre for Research in Photonics at the University of Ottawa.

All five coins are doubled dated ("1996 2021") in honor of the 25th anniversary of the proclamation designating the maple tree Acer spp. The reverse and obverse field pattern reproduces an expanded, non-pulsating version of the pulsating pattern on the maple leaf.

The obverse features the effigy of Her Majesty Queen Elizabeth II by Susanna Blunt. This pulsating technology was made possible by a close collaboration between the Royal Canadian Mint Research and Development Team and the University of Ottawa's Centre for Research in Photonics. Sub-millimeter scale mirrors were precisely engineered to exact dimensions and orientations that would allow the individual facets to manipulate photons (light particles) and bring a sense of motion to the engraved-only design. The mirror array was then engraved on the master dies and struck onto 99.99% pure silver blanks. Fittingly, our proudly diverse country isn't represented by a single maple species.

The proclamation issued on April 25, 1996 broadly defined Canada's official tree as the genus Acera generic maple that represents all of the 10 different maple species that are native to Canada. Why was the maple chosen as Canada's national tree? The maple leaf has a place of honor on our coat of arms and flag, but the adoption of a national arboreal emblem in 1996 formally recognized the maple tree's role in the social and economic development of Canada, from early First Nations to modern-day industries.