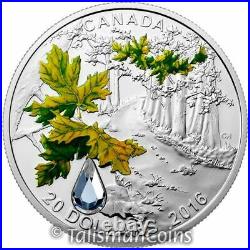 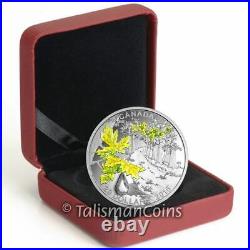 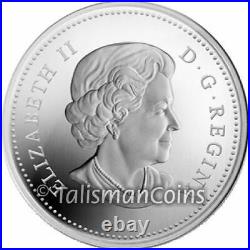 BACK BY POPULAR DEMAND, the massively desired Swarovski Crystal Raindrop - this time with a tiny mintage limit of just 4,500! A forest of giant Bigleaf Maple trees is caught just after a rainstorm, with a perfect crystal raindrop gently bending the leaf on a simply stunning new Silver Maple Leaf proof in full color!

In combining the beauty and simplicity of the Swarovski crystal with its unique colorization process, the Royal Canadian Mint has produced a marriage made in numismatic heaven - and the first Canadian coin series of its kind! Canada is world-renowned for its forests, but none of them would exist without the life-giving nourishment of water and rain. This breathtaking pure silver proof features Bigleaf Maple trees along a forest trail, drawn from a captivating perspective that showcases their spectacular foot-long leaves!

With selective color and a glittering Swarovski crystal gemstone set as a raindrop, it's an enticing invitation to head to the forest and experience this arboreal jewel up close! Check out the previous issues in the Swarovski Crystal Raindrop program!

A Stunning, Naturalistic Work of Original Art. This breathtaking coin design by Canadian nature artist Caren Heine depicts a forest of giant Bigleaf Maple trees, stretched along a tranquil forest trail, drawn from the captivating perspective of the viewer. Selective full color showcases the super-sized leaves of the Bigleaf Maple. The tree's preferred type of terroir and environment is evident in the scene while the element of rain is expressed through the raindrop-shaped, genuine Swarovski Crystal element that bends the Bigleaf Maple leaf in the foreground - a true "Jewel of the Rain"!

The Bigleaf is one of the largest and fastest-growing maple trees in Canada, a true giant among maples! Reaching heights of up to 125 feet (35 meters), this elegant maple is well named: its shiny, dark green, five-lobed leaves average a full foot across (30 cm), with two foot wide leaves not impossible! The Bigleaf Maple has by far the largest leaves of any maple tree in North America. When this proud western native tree grows in the humid, crowded Pacific forest, it can often be found with its bark and branches draped in epiphytic moss and ferns, lending a spirit of enchantment to its majestic silhouette.

In early spring, yellow-green flowers hang in clusters at its twig-ends. These sweet, edible delights attract deer and other animals to the saplings.

The flower is soon followed by fruit: a pair of graceful, furry, winged seeds (samaras). Native American peoples have long been attracted to the Bigleaf Maple for its savory sap, sweet flowers, and close-grained hardwood. This is the thirteenth (and lowest mintage) in the series of annual Color Silver Maple Leafs. Stunning in its artistry, beauty and simplicity, this new pure silver proof in the Color Silver Maple Leaf Series ups the ante with a few twists, including a Swarovski Crystal raindrop! These upgrades to this most popular of annual programs include: 1.

We believe that this coin presents an entry-level investment opportunity in a relatively low-priced proof. A quick sell out is expected. For more information about Swarovski crystals of Austria, please see the presentation at the end of this article. The Royal Canadian Mint leads the world with its proprietary colorization technology, in which the color is actually sealed on the coin.

The intricate detail, smooth gradients, and extreme precision of the technology create a stunning look on each coin. The Royal Canadian Mint refines the purest silver in the world. This one troy ounce silver coin is 99.99% pure! A beautiful, full-color image of Bigleaf Maple forest, with a vibrantly hued Bigleaf Maple leaf, yielding to the weight of a single raindrop, represented by a genuine Swarovski crystal. The date and denomination are both indicated. A cameo frosted proof portrait of Her Majesty, Queen Elizabeth II, in profile facing right. This portrait, the fourth effigy of the queen to appear on Canadian coinage, was executed by the artist Susanna Blunt. The legend ELIZABETH II D. REGINA ("Elizabeth II, Queen by the Grace of God") also appears. The coin is encapsulated inside a burgundy leatherette, clamshell-style presentation case, lined with black velvet and protected by a black outer box. An individually-numbered certificate of authenticity is included. Proof with Color and Swarovski Crystal. Swarovski is the luxury brand name for the range of precision-cut crystal glass products produced by the privately-owned company Swarovski AG of Feldmeilen, Austria (near Zürich, Switzerland). Swarovski crystal was born when a Bohemian, Daniel Swarovski, invented an automatic cutting machine in 1892.

In 1895 the Swarovski company was founded when he established a crystal cutting factory in Wattens (near Innsbruck, Tyrol, Austria). Here he could take advantage of local hydroelectricity for the energy-intensive grinding processes he had patented. Swarovski crystal contains approximately 32% lead to maximize refraction. The Swarovski Crystal firm produces a wide range range of products, but is world-renowned for the incredible quality and brilliance of its crystal jewelry.

In order to create a crystal that allows light to refract in a rainbow spectrum, Swarovski coats some of its crystals with special metallic chemical coatings. For example, Aurora Borealis, or "AB", is one of the most popular coatings, and gives the surface a rainbow oil slick appearance. Recent developments include the 2004 release of a new, patented cut, Xilion, designed to optimize the brilliance of roses (crystal components with flat backs) and chatons (diamond-cut crystals). This item is in the category "Coins & Paper Money\Coins: Canada\Commemorative". The seller is "talismancoins" and is located in this country: US.