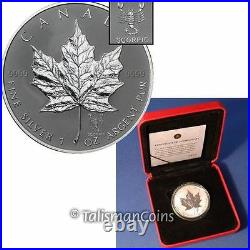 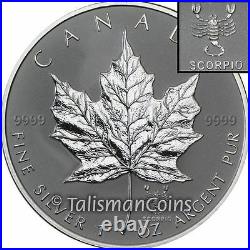 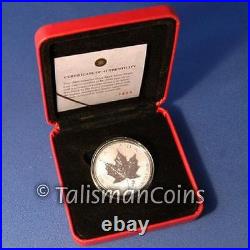 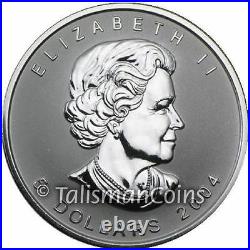 Ultra-low-mintage SILVER MAPLE with roman zodiac privy mark and rare reverse proof finish celebrates the scorpion Scorpio! Scorpio is an astrological sign, one of the twelve signs of the classical or Roman zodiac.

This sign originated with the constellation Scorpius and is the eighth sign of the zodiac. The mintage of each of the Roman Zodiac.

Is only 5,000 - the second lowest ever for any SML! Scorpius is traditionally seen as the appellation of the scorpion sent by the goddess Hera, wife of Zeus, to slay the hunter Orion.

You may notice that in the sky, however, Scorpio is nearly opposite to Orion. It is said this was arranged by Zeus to forestall continuation of the feud between his wife and Orion.

Other mythology ties Scorpius to Phaethon, son of Helios (the sun). It is said that on the occasion that Phaethon was allowed to drive the sun-chariot, he lost control of the horses, and as they were galloping wildly across the sky they were further frightened by Scorpius. The wild gyrations of the sun chariot on this day were reported to create the constellation Eridanus. The constellation Scorpius clearly resembles the tail and body of a scorpion. As a sign of the zodiac, Scorpio is referred to as a feminine or introverted, negative sign.

Its element is water and it is one of the four fixed signs. Traditionally, in astrology, Scorpio is ruled by Pluto, although traditionally it was Mars before Pluto's discovery. Scorpio's period, when it is occupied by the Sun, runs from October 24 to November 22, and the 8th House is the house Scorpio rules. In astrology the astrological signs of the twelve houses equal segments or divisions of the zodiac. According to astrological beliefs, celestial phenomena reflect or govern human activity on the principle of "as above, so below", so that the twelve signs at the same time are held to represent twelve basic personality types or characteristic modes of expression.

Those born under the sign of Scorpio are said to be powerful, intense, emotional, deep, loyal, and have magnetic personalities. They can also be seen as secretive, sensitive, and brooding or even destructive.

With a total mintage of only 5,000 each, these Roman Zodiac. Have become very hard to find in the market. Is the most collected Canadian coin. As all SML collectors (and all Privy Mark collectors) need this coin, there are simply not enough to go around!

The Royal Canadian Mint refines the purest silver in the world. Since their introduction the Canadian Maple Leaf coins have been regarded as among the finest silver coins in the world, owing in large part to their superb purity. This one ounce silver coin is 99.99% pure!

A highly-detailed depiction of a single maple leaf. To the right of the maple leaf's stem is a privy mark of the scorpion Scorpio.

The legends FINE SILVER 1 OZ and 9999 guarantee the weight and purity. Her Majesty, Queen Elizabeth II, in profile facing right. This portrait, the fourth effigy of the queen to appear on Canadian coinage, was executed by the artist Susanna Blunt. The date, denomination and the legend ELIZABETH II also appear. This beautiful, reverse proof silver coin is encapsulated inside a burgundy leatherette, clamshell-style presentation case, lined with black velvet.

Each comes with a numbered certificate of authenticity. This item is in the category "Coins & Paper Money\Coins: Canada\Commemorative". The seller is "talismancoins" and is located in this country: US. This item can be shipped worldwide.