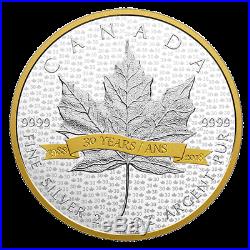 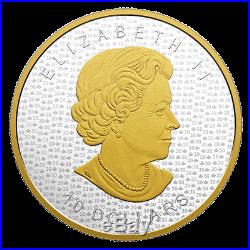 Unchanged since the very first issue in 1988, the solitary maple leaf that adorns the Silver Maple Leaf (SML) coin is widely regarded as a symbol for unparalleled artistry, craftsmanship and value. This signature design is given the royal treatment on a 2 oz. Fine silver coin, as the Royal Canadian Mint celebrates the 30th anniversary of one of the worlds most sought-after bullion offerings. A SPECIAL ANNIVERSARY: The Royal Canadian Mint proudly celebrates 30 years of one of the worlds most sought-after bullion coins, by re-creating the popular SML as a stunning numismatic piece. A DISTINCTIVE TOUCH: The eye-catching gleam of gold adds an elegant touch to the commemorative banner on the reverse, the effigy on the obverse, and the rim on both sides. DOUBLING UP ON SILVER: The signature symbol of Canada, the iconic maple leaf is exquisitely engraved in 2 ounces of. 9999 fine silverdouble the silver of the actual bullion coin. AN EYE-CATCHING FEATURE: Filling the field on the reverse and obverse, the repeating pattern of a maple leaf with the number 30 is a visually unique way of commemorating this special anniversary. The laser-engraved pattern diffracts light, creating a wondrous hologram-like effect that adds a luminous quality to the design. This large-sized numismatic piece honours 30 years of history through its enhanced re-creation of the Silver Maple Leaf (SML) bullion coin. The reverse features the now-iconic image of a single maple leaf, whose superb shine and intricately etched details have remained unchanged since the SMLs debut in 1988. As an added commemorative element, a gold-plated scroll banner is gently wrapped around the base of the leaf; it bears the engraved words 30 YEARS/ANS, which are centrally positioned between the dates 1988 and 2018.

The gold-plated rim on the reverse and obverse adds a luxurious gleam to the overall design, while the field is filled with a repeating pattern of a micro-sized maple leaf with the number 30. This background pattern echoes one of the SMLs security features, and its unique way of diffracting light results in a hologram-like effect that adds to the beauty of this extraordinary keepsake.

The obverse features the gold-plated effigy of Her Majesty Queen Elizabeth II by Susanna Blunt. No: 163661 Mintage: 6,000 Material: 99.99% pure silver Finish: Modified Proof Weight: 62.69g Diameter: 50mm Edge: Serrated Certificate: Serialized. (WITH THE EXCEPTION OF GOLD COINS). ONCE YOUR DONE SHOPPING, PLEASE MESSAGE ME AND I WILL SEND YOU A COMBINED INVOICE. The item "2018 $10 Canada Maple 2 Oz Silver 30 Years Commemorative Unc Coin COA Box RCM" is in sale since Thursday, March 5, 2020. This item is in the category "Coins & Paper Money\Coins\ Canada\Commemorative". The seller is "the_coin_shoppe" and is located in Niagara Falls, New York.